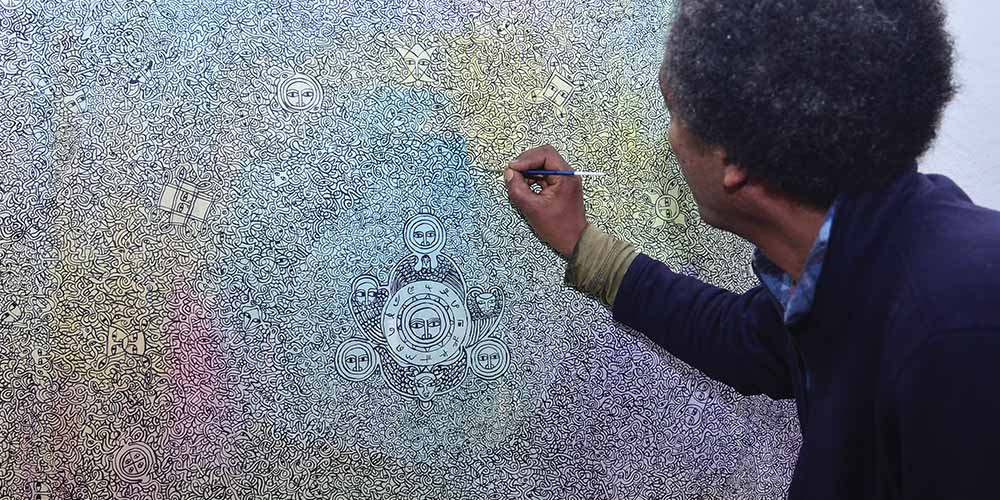 The age old claim of Ethiopians that their country is the cradle of mankind has been scientifically proven right. Archaeology and carbon dating have provided evidence that early mankind hailed out of present day Ethiopia. Since then, we have heard a number of internationally recognized people from across the world site that fact to claim that everyone is Ethiopian after all.

As a pre-historic country with human interactions that surpass the development of mankind’s intellect to record social engagements, Ethiopia is home to numerous artistic and cul-tural tenets that are yet to receive the proper study they deserve. Ethiopians have countless indigenous artistic and cultural assets; however, these bridges with the distant past have been covered up recently by imported infantile and materialistic views of the world. But every once in a while, a strong enough wind blows away the dust covering these old relics and present day Ethiopians stand face to face with the majesty of their glorious past.

Telsem is one of these relics of the past. The small number of Ethiopians who practice the art claim that it is as old as the crea-tion of mankind himself. The art has been passed down through generations along traditional ways. However, the art had long been practices through confined circles as it is believed to be as-sociated with the spiritual world in its quest to draw positive and negative energy. The art could not become mainstream because of that reason and it is stigmatized as a result.

As one of the few countries that adopted Christianity and Islam early on, Ethiopia has drawn different art forms from these religions. “Ethiopian medicine and talismanic art drew from Christian and Muslim traditions, including Arabic-language protective scrolls, examples of which can be found in the col-lection of the city Metropolitan Museum. Healing scrolls likely originated during the Aksumite empire, with several million in use by the nineteenth century. Despite their prevalence, the scrolls have drawn the ire of both political and religious leaders. In the fifteenth century, the emperor Zar’a Ya‘eqob condemned the use of magical objects and diviners, harshly punishing those who relied upon them. While the Ethiopian Orthodox Church does not condone magical objects, scrolls are tolerated because they incorporate Christian texts. Healing scrolls served the same purpose that domestic icons fulfilled in other forms of Orthodox Christianity. The use of scrolls and other traditional Ethiopian medicines has declined since the 1970s,” Kristen Windmuller-Lu-na writes.

Telsem has its own philosophy and characteristics that distin-guish it from secular (modern) art. In fact, there are similarities and differences between secular art and Telsem. Their similarity is associated with the issue they explore, since both of them rep-resent social and individual issues. In addition, both of them are visual art. Their basic difference, on the other hand, lies in the languages the artists use. In secular or modern art, the artist can use his own personal languages, philosophy, symbols and many more while in Telsem the symbols, letters, and the like are fixed.

“Telsem has multidimensional uses; but as a painting art, it’s value surpasses the sheer pleasure, amusement or anger one draws from pictorial depictions. In the case of Telsem, the wisdom of the painter elevates the drawing one step above and gives it the power of healing, bringing good luck or the opposite. It has spiritual power,” elaborates Robel Temesgen, painter and lecturer at Addis Ababa University Art School.

As an art form that can potentially be used for constructive or distractive purposes, stated Robel, there need to be values that can act as a leash on the ethical dispositions of the artist. Such a mechanism helps manage the artist. Robel underscored this fact as the major reason behind a select few studying the craft with the art most of the time passed from parents to children.

Telsem is an art that has many forms and shapes. These forms and shapes, artists claim, have spiritual characteristics and could be done to bring grace, influence, health, wealth, prosperity and the like. These things are represented in various symbols. “During their life on earth, human beings pass through a number of ups and downs. People could have various problems that are related to marriage, social life, family affairs, and the like. The journey and the solutions for such hardship can be represented in the form of Telsem by using visual arts,” explains Henock Melkamzer, a painter and Telsem professional who has more than two decades of experience.

Henock claims to have learned at least four things from Tel-sem. These are painting, Telsem for medical treatment, farming, and war. “I’m focusing on the painting part,” stated Henock. If someone wants to do Telsem, she/he needs to know numbers. One year has 367 days in Telsem and each of those days are rep-resented by its own symbol. The days are stacked into 13 months, in line with the Ethiopian calendar. Letters (Fideloch), phrases (Haregoch), colors (Qelemoch) and appearance (Melk) make up important aspects of Telsem art. If a painting misses any one or multiple of these things, it can’t be categorized as Telesem art.

Back in the days, professionals of Telsem used to collect various plants, stones, and animal skins to produce a paint that would fit the idea they would like to represent by using Telsem painting. Nowadays, many types of paints with various colors are produced at indus-try level. The same is true for canvases. Therefore, it has become much easier to use these findings.

Henock argues that the knowledge found in Telsem has the potential to create a progressive generation, active citizen and it is helpful for the growth and development of the country. “Currently, we rely more on imported knowledge to lead us, instead of local wisdom and skills. If deep research was to be done on Telsem, I believe we could find a solution for most of Ethiopia’s as well as Africa’s problems,” Henock remarked. Henock has a deep under-standing of Ethiopian zodiac signs, Ethiopian astrology and the 13 months calendar from which he draws signs and uses them in his Telsem drawing.

Kristen believes that Telsem has the power of healing. “Ethiopian healing scrolls eliminate illness by purging evil spirits and demons from a sick person. Part of a larger healing ritu-al, the scrolls were commissioned by the illiterate to combat grave illnesses. While plant and animal medicines alle-viate physical symptoms, the medicinal scrolls alleviate spiritual symptoms. A pan-religious phenomenon practiced among Jews, Christians, and Muslims in the northern regions of Amhara and Tigray, the scrolls restore health by uti-lizing written words and talismanic im-ages imbued with magical protective powers,” Kristen wrote.

Melkamzer Yehun, Henock’s fa-ther, along with prominent Ethiopian painters Eskinder Bogosian, Worku Goshu and Zerihun Yetemgeta are among the prominent Telsem profes-sionals in Ethiopia. Telsem is not pro-duction oriented. It is done on the per-sonal request of individuals. Moreover, as it takes extended time than secular art to do it, mass production is not its objective. However, professionals such as Henock have recently exhibited their Telsem work at art galleries.

Just like other sectors, painting has its own challenges. “There is no government structure to promote the sector. The community doesn’t have the habit of buying paintings and vis-iting art galleries. So, some artists do their work targeting tourists. When we come to Telsem, there are additional challenges. First, it’s not included in the art education system and it’s associated with tradition than modern art. It is not considered as a product that serves the modern world. There is also stigma towards Telsem, since it is believed to have spiritual association,” Robel said. He also pointed out that the painting market is subjective and depends on the individual’s good will. As with the rest of art work, the price of Telsem paint-ings ranges from ETB1,000 to millions.

“Telsem isn’t institutionalized yet and there are no books that can be found at book stores or libraries that can reveal the wisdom. It has more of a traditional value. But as tradition is the spring board of science, if researches were to be done in the area, Telsem’s area of application and value could be extended. Based on this belief, we are working to provide the lesson at aca-demic level. Hope this will add value to the country and the generation can easily acquire the wisdom,” Henock concludes.

nextCarrying the Weight of COVID-19 into the Ethiopian New Year