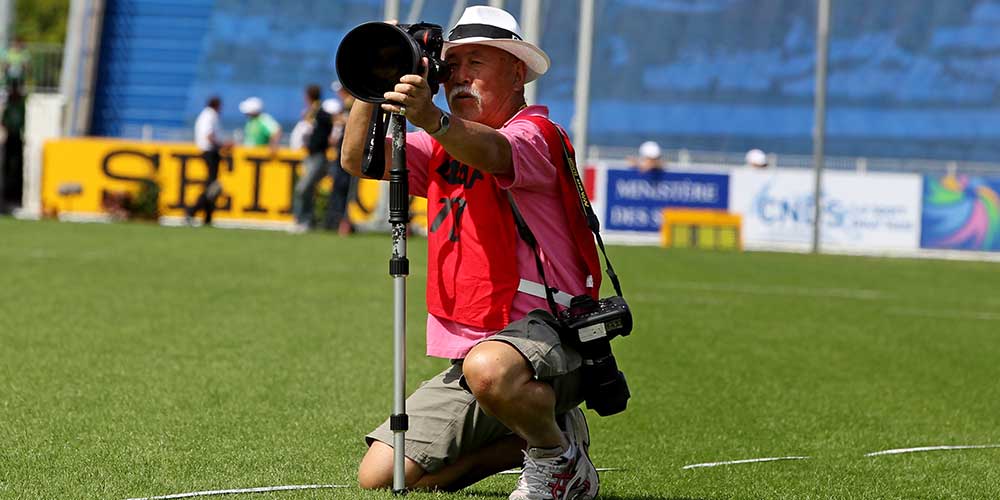 The breadth to which the success of Ethiopian athletics reaches is truly a wonder. First acquainted with the nation on a journalistic assignment in the 1980s, Jiro Mochizuki has since been attached to Ethiopian track and field greats and the nation at large. Befriending the great Haile Gebreselassie along the way, the Japanese frequently visits Ethiopia and is one of the professional photographers capturing the Great Ethiopian Run. Though disappointed with Ethiopia’s performance in his home town, his inspirational book of Haile is a testament to the running legend and the warming relationship between Ethiopia and her admirer. EBR’s Abiy Wendifraw visited Jiro in Tokyo during the Olympics.

With his small but sharp eyes, he has witnessed almost all of the big moments from the athletics world in the past decades. He has covered continental and regional championships, world championships, Olympic games, and even the FIFA World Cup. Jiro Mochizuki, the man who turns 80 later this year, prefers to introduce himself as “a boy from Tokyo who loves track and field athletics.” And that is the same good reason why he became so close to Ethiopia and Ethiopian athletics.

For the man who travels the world to shoot pictures of athletics greats, Ethiopia is that special temple he wants to visit regularly. That is why Jiro has never missed a single Great Ethiopian Run (GER) race in the last 17 years of its existence. Whenever the biggest road race in Africa is taking place, the photographer is ready in his unique position to capture beautiful pictures.

Dagmawit Amare, General Manager of GER, knows the Japanese for over 16 years. “One of my delights when it comes to staging the race is welcoming our guests from all over the world. Having Jiro is like welcoming my Japanese uncle for a visit to Ethiopia. His love for athletics is not only about shooting the greats in action, but also creating friendship with all of the athletes, especially Ethiopian and Kenyan ones. With all his travels, I feel that Ethiopia seems like a third home to him after Japan and France.”

Jiro, who has lived in Europe for over 40 years, does not hide his special and distinct impression of Ethiopia and Ethiopians. “Look, Ethiopia is a very special place for me and Ethiopians are very different from other Africans,” says Jiro. “That is my impression. From my experience, once they accept you, Ethiopians leave the door open for you to come in anytime you like.”

In his yearly calendar, Jiro wants to make sure November is free from other businesses. That month is all for Ethiopia and its pinnacle athletics event, GER. “It is for the job he does for free. His payment, I suppose, is his passion for the race, athletics in Ethiopia, and especially his long-term friendship with Haile Gebreselassie,” says Dagmawit. “Every November with him around is always special. From airport pickups to the first phone call on his arrival asking, “Dagi, where are you?” to enjoying Ethiopian coffee and days spent in my office with occasional conversations and laughs in between the busy schedule.”

As a journalist, Jiro’s special bond with Ethiopia began way before the introduction of GER and even years before his friendship with the great Haile. He arrived in Addis in the mid-1980s for an athletics story, about Ethiopians in track and field. He was here to interview Mamo Wolde, the 1968 Olympic gold medalist, and Nigussie Roba, the then secretary-general and coach at the Ethiopian Athletics Federation. He did not know that that would just be the beginning of his long-term relationship with the East African country and its athletic greats.

The Japanese has published several books and exhibited photographs in European art galleries. The one he produced after closely following Haile’s long running career since 1991 seems to be a great work from his soul for the legendary long-distance runner, and for Ethiopian athletics in general. The book, “Emperor of Long Distance,” can be seen as Haile himself in the eyes of his friend of 30 years, Jiro.

“Look, Haile is such a special person. He always invites me to come and visit his family. I never thought that I would publish a book about him. After he got his seventh gold medal, he turned to the marathon and it was clear he was getting into the final stages of his career. I started thinking of doing something. One day I said to him, “Hey, Haile. Look, I have a few photographs from your races. He said ‘Jiro, just do what you want to do. I trust you. Go ahead.’ That was like a permission. I took responsibility and enjoyed it like that. One day Haile would retire, but I thought that I can keep inspiring people from all over the world.”

Producing the book was not just about compiling the best pictures that Jiro had documented over the years. He needed Haile’s valuable inputs in the process. “He was so cooperative,” Jiro remembers. “I cannot remember how many races he competed in, maybe some 230 or 240, amongst which he broke records and won medals. Cross country, world championships, 5000m, 10,000m, marathon, and so on. It was difficult for me to place everything year by year. So, I requested him to pick one race from each year which he wanted to talk about. It is in that way I started to put everything together, year by year to page by page in the book.”

Now the book is one of the gifts Haile happily presents in his office and at GER events, especially to youngsters he wants to inspire.
For Dagmawit, the book can be described as proof and testament of hard work, commitment, and the inspiration it carries for so many, especially the young generation. “It’s a book that praises an Ethiopian hero that is celebrated worldwide. I feel Jiro has had a massive contribution in the golden era of Ethiopian athletics by keeping and chronicling the history of this great athlete.”

Jiro’s presence in Ethiopia has a lot more meaning than just covering events. He professionally helps those around him. “His professionalism is expressed in the selection of cityscape, camera position, organization, and the advising of local photographers with his special skills. His amazing panoramic pictures of the start of each race in Meskel Square are an asset to us in showing the growth of the race and the city over the years. His connection to international media and the global athletics community has added extra value in internationally promoting the race and beautiful Ethiopia,” Dagmawit explains.

Being amongst legends specialized in sports photojournalism, Jiro seems shy to speak on how he became such a success in the industry. Is it just because he is from the country known for cameras? “I do not know, but I have skills and have also been educated as a photographer. As a boy, I was a triple jumper and devoted myself to athletics training. I liked the sport; that is when I tended towards writing articles. And later, I became a photojournalist as well.”

His love for track and field athletics is now as strong as ever. Last month, he was in Tokyo doing his job but is not at his happiest when talking about Ethiopians’ performance in his hometown. Jiro feels that the way in which Ethiopian athletes are being coached should be reviewed. He also seems unimpressed by what he witnessed in his recent visit to Ethiopia, arguing that the construction activity in Addis and its suburbs are not friendly to athletes.

“I always look for reasons to come to Ethiopia. I can stay at Haile’s place as I always want to visit that family. How the kids are growing and how Haile is doing every year is always of interest to me. I always find him with one more new hotel and expanding his business. I think he has got a business talent more than a running talent. He has such a great brain; that man inspires me. His attitude never changes. I can stay for as long as I want to. It is so wonderful to have a friend like that.” EBR

The Story of the Strong Woman in the GYM

next"Media Cannot Become the Fourth State, Where the Three are Missing."